We’ll blame Gigi, our kitten, for Maggie, our duckling, learning to fly. Gigi loves to pounce, playfully, when Maggie is around. Consequently Maggie got very good at moving away quickly. As running from a playful kitten is rather impractical when you are a duck, the next obvious step was to utilise the wings. First it was a high hop, then a longer hop, and as Gigi loved this new game and would jump with Maggie, the hop became further and further. Both of them were in heaven. Gigi because she had finally found a way to play with Maggie (something she had been searching for since her arrival), and Maggie because, well, she was flying.

We soon developed a routine, particularly in the mornings. Maggie, Gigi and I would leave our cottage at dawn and walk down to the let the other animals out. Maggie would waddle behind me and Gigi would sprint ahead, then come back and pounce on Maggie, then run ahead again. Maggie in turn would fly a short distance, then waddle back to me. It could be a somewhat slow journey to get to the other animals sometimes.

As Maggie’s flying ability strengthened, she flew higher. Gigi would pounce and Maggie would fly with Gigi chasing and leaping underneath. If Maggie wasn’t feeling particularly playful she would simply fly all the way down to the other animals, leaving a bewildered Gigi half way, wishing she could fly too.

With flying, came independence. For both of us. Now, remember, a Duck is a flock animal. They panic if they are on their own, but as long as Maggie has another animal, or better yet a human in sight, she is good. In September I think we entered the teenage years. She started to hang around with the other animals. She would stay down in the lower garden with them most of the day, sometimes all day. Ah, freedom!  The chance for me to get things done without a duck following me everywhere, quacking when she can’t see me.

Before this, when I needed to go out, say to the shops, I would put Maggie upstairs in our cottage. A mirror to keep her company. She was very obviously resigned to these moments, telling me off quite distinctly when I would come home and bring her back downstairs. I think this is what prompted her to start spending time with the other animals. They at least are more interesting than the duck in the mirror.

Each day is different with a pet Duck. There is no predicting. The plus side, I have become far more able to change my plans quickly. For days she will quite happily hang about with the other animals, then I might get a spate of her wanting to be with me. No matter how many times I take her down to the other animals, within an hour she is back up at the cottage, letting me know she has arrived. I have become quite adept at reading her moods and determining what sort of day I might expect. Today is one of those days when she wants to be with me and is currently asleep on her cushion on the sofa. 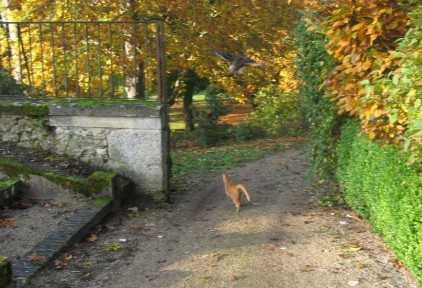 Maggie and Gigi hanging out in Rabbit World

Maggie with the ducks (she’s the one slightly apart). Read more about Maggie 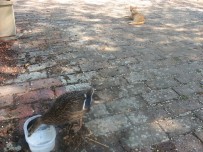 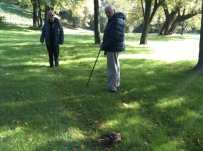 Mum and Dad walking with Maggie in the garden. Read more about Maggie

Maggie on her cushion. Read more about Maggie