Something I have been aware of as I get older is the sheer quantity of chemicals I have been putting on my skin over time.  It took moving to the countryside and a complete lifestyle change (and a lack of expendable money) to finally get me to do something about it. And now I am asking ~ what took me so long?!?

Making your own beauty products is actually really, really simple, quicker in general than even going to the store to buy them. And – serious bonus – I know exactly what I am putting on my skin, as well as the satisfaction of having made them.

But if you are like me, the first hurdle was in getting going, that impetus to actually do rather than think. Yes, we are all time shy; been there, got that, bought the bridge. It’s really more a question of upping it up the priority ladder in your mind.

For me, the impetus was a friend coming to visit from the UK who was willing to hand deliver. The basic items I was looking for, particularly coconut oil and shea butter, are both seriously expensive in France and heavy to ship. So duly ordered online (along with my much needed apothecary bottles for our shop) it was only a matter of patience until they arrived, but since I had been putting if off for almost a year, what were a couple more weeks.

But what to buy, when there is so much choice out there, even in the making it yourself market? Well, the more research and general perusing of blogs and websites I did the more I realised there were some staple basics. I focused it down to a few recipes that actually seemed easy and doable and that made items I would really like to have and use. I also kept an eye out for the possibility of re-using or recycling as well ~ my mantra.

One of the best sites I have come across for all sorts of natural products is Wellness Mama.  It’s where first learned about ‘washing’ my face with oil – Oil Cleansing. As oil is something we always have in the home, I took to it like a chip to the deep fryer.  She also has a series of great instructional blog entries on How to make your own Skin Lotions, complete with recycling finished solid deodorant dispensers. Oh yes.

I also came across  Blah Blah Magazine in trying to find a use for old coffee grounds (besides inundating my garden with them – as we drink that much coffee). She has a great recipe for making a coconut coffee scrub. Yum yum.  And, I learned how to make my own Orange Essential Oil (for adding to my lotions and potions). Which I must say worked far better than Wikihow’s how to make essential mint oil.

I turned my kitchen into a mad scientists laboratory for a day and began measuring, melting and moulding. Thirty minutes later I had a foot salve, a face cleanser, a body scrub, a body lotion, an essential oil and a gorgeous smelling kitchen to show for it. I had recycled a deodorant tube, two glass candle jars and a glass crème brulee jar. Oh yes, I was feeling decadent, pampered and smug all at the same time.

And it doesn’t hurt that I know exactly what I am putting on my skin.

Melting Coconut oil in a cobbled together double boiler

My Body lotion set in a recycled deoderant tube 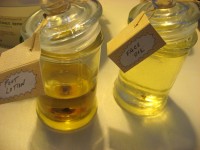 2 thoughts on “Turning my hand to handmade beauty products”